On February 22, 2018, I got to geek out and see a real-life celebrity in person at the Cascade Theater, right here in Redding, California. Compass saved a block of seats and I was in the second row; so close I could see the lines on her face, the detailed embroidering on her shirt and if she was a spitter, I would’ve been in the splash zone.

The first time I’d ever heard of this person was on a boring Saturday afternoon while I was flipping through channels on TV. All of a sudden, I came across a scene in a movie where a young woman, screaming and crying, was kneeling on all fours in a cattle chute asking her aunt to close it on her. I thought it was a horror movie and that she was about to lose her head, but the strangest thing happened. Her aunt closed the cattle chute, which gently pressed against the sides of her body, in the same way it would with cattle and she instantly calmed down. I thought it was pretty bizarre, but I was intrigued so I kept watching.

I was mesmerized by what I saw. It happened to play again right after, so I watched the entire thing a second time in a row. This was the first time I was introduced to Temple Grandin. 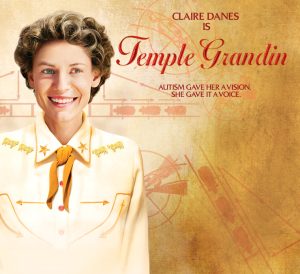 Dr. Temple Grandin, a Ph.D in Animal Science and a Professor at Colorado University, is well-known for her revolutionary designs of livestock handling facilities around the world, which is interesting all on its own; but what has made her such a public figure is the fact that she has accomplished so much while being autistic.

The cattle chute scene I saw was from the Golden Globe and Emmy award winning HBO movie Temple Grandin. It’s the true story of Dr. Temple Grandin’s life, growing up with autism, navigating a world that didn’t understand her, but more importantly, not being limited by any of it. I laugh, cry and cheer every single time I watch this movie. It’s on my top ten must-watch list, for sure.

When Dr. Grandin came to Redding, she talked for about 2 hours, but only had a couple points that she really wanted to drill in. While she talked about her life and some of the work she’s done, she really spoke about her heart for future generations and what she believes they need to be successful. Here are the cliff notes to her talk:

Dr. Grandin had insight, wisdom, and a lot of humor to go with it. I had a great time and I can’t wait until her next book comes out!

Have you seen Temple Grandin live or read any of her books? Let us know your experience in the comments!

2 responses to “An Evening with Temple Grandin”